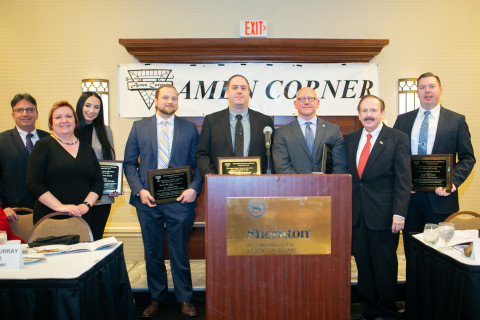 Lt Brian McKeown was honored at the annual Amen Corner Awards for his collaboration with multiple agencies in the investigation and arrest of a serial business burglar.

The entire CIRT team was recognized for their tireless devotion to training and incident response, but more especially the tactical operators who responded to the Tree of Life shooting in October 2018.
CSPD Officer Kiefer (CIRT -Tactical Operator), seen in these photos in uniform, responded and played a crucial part in the overall response.
Also pictured are left to right…Castle Shannon Councilman and SHACOG liaison William Oates, Officer Dan Janeda (CIRT-Negotiator), Mayor Don Baumgarten and Police Chief Ken Truver.

We are grateful to our representatives on the CIRT team and offer congratulations to Officer Kiefer for receiving the Medal of Valor. 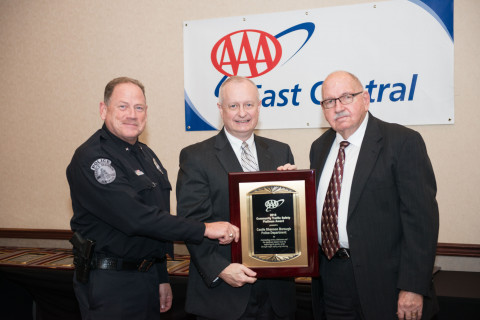 This is the 10th straight year CSPD has achieved the highest level award (Platinum) for their work in Engineering, Education and Enforcement of traffic safety related measures.

Sgt. Brian McKeown was promoted to the rank of Lieutenant on 7-9-18

Lieutenant McKeown supervises department investigations, is the Information Technology Liaison, and oversees property and evidence management. He is a Keystone Oaks Graduate and has been with the Castle Shannon Police Department since 1998. Brian graduated from the FBI National Academy in 2016 (Session 264) and is a member of the FBI Law Enforcement Executive Development Association.

We congratulate him on his new assignment. 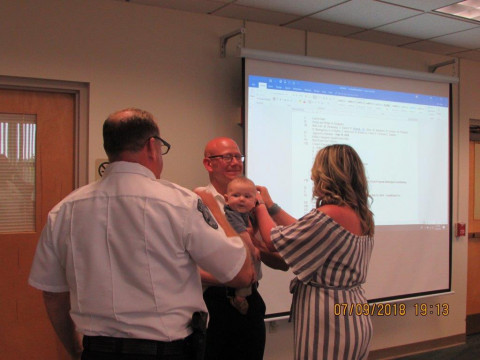 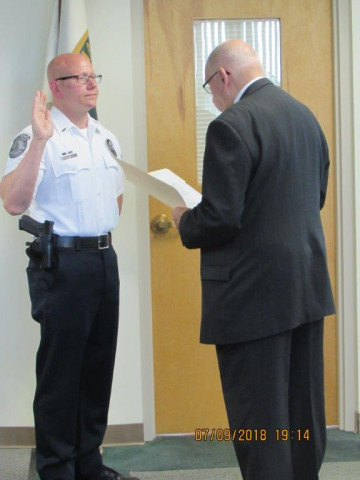 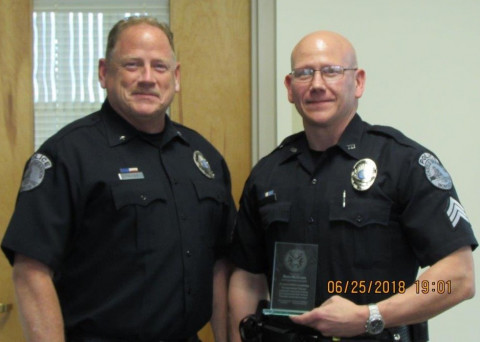 Officer John Kiefer was recognized for completing training to become a Drug Recognition Expert. The Training was sponsored by the IACP and the Pennsylvania DUI Association. 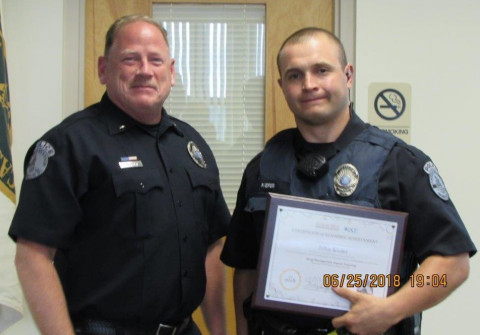 Officer Justin Majors was recognized for performing lifesaving CPR on an infant at a residence in April, 2018. 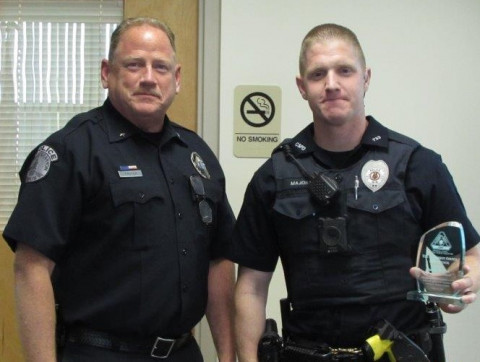 Congratulations to these fine examples of community servants!

This month’s tribute to our officers includes recognition to women in emergency services.

These Emergency Service Workers will be featured in the CSPD 2017 Fall edition of the community magazine “Crime in America”.

We thank them for their service!

Chief Truver was sworn in as the President of the Allegheny County Chiefs of Police Association for 2017.

Sergeant Caruso Retires with 36+ Years of Service to Castle Shannon

Please join us in congratulating Sergeant Joe Caruso on his retirement. Joe started with CSPD in September 1980. His last day is February 7, 2017.

Borough Council recognized Sgt. Caruso at the January 23, 2017 Council meeting and Mayor Baumgarten read a Proclamation celebrating 36+ years of service to the Borough and the Castle Shannon Police Department.

We all wish Joe well in his next chapter.

Lt. Lane was sworn in as President of the Western PA Chapter of the FBI National Academy Associates.

His oath was administered by Special Agent in Charge of the Pittsburgh Division, Robert Johnson at the February Chapter meeting. 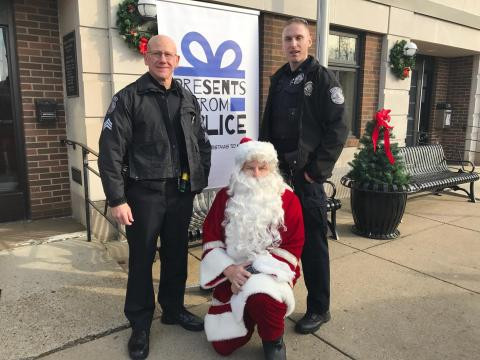 We would like to thank all who participated in Presents from Police. Sgt. Brian McKeown and Officer Mike Kalas represented the Castle Shannon Police Department on Tuesday, December 20th by delivering 2 car loads of gifts to kids at Children's Hospital of Pittsburgh. 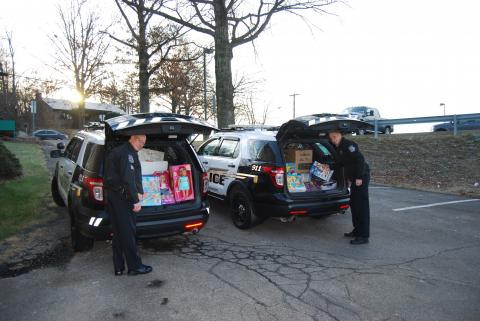 Officer James P. Fleckenstein, Jr. was promoted to the rank of Sergeant at the Borough Council meeting of Monday, November 28, 2016.

Sergeant Fleckenstein has been with Castle Shannon Borough since 2000.

Chief Truver attended a Bethel Park Council Meeting to present BPPD Officers and a dispatcher with letters of commendation for their role in the capture of the actor who robbed the Dollar Bank on November 16, 2016.

The Castle Shannon Police Department was recognized by the American Automobile Association (AAA-East Central) at the Annual Community Traffic Safety Awards luncheon at the Cranberry Marriott on Wednesday November 9, 2016. 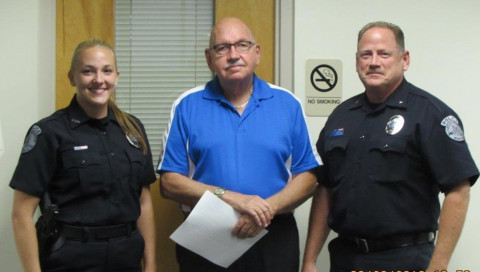 Officer Platt comes to us from the Hampton Township Police Department.

She is a North Hills native and graduate of North Allegheny High School.

Christine graduated from Kent State University with a Bachelor’s Degree in Justice Studies, and she obtained her MPOETC certification as a Police Officer from the Allegheny County Police Training Academy.

Please introduce yourself to Officer Platt when you see her in your neighborhood.

The K9 team of Officer Jim Fleckenstein and Riad were recognized at the Borough Council meeting of 8-8-16. 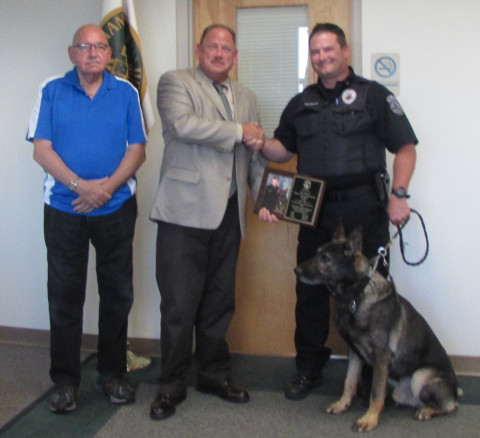 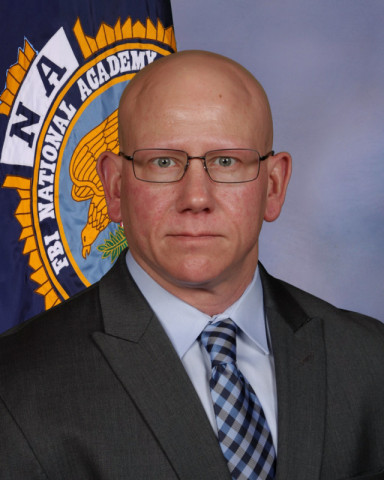 Sergeant Brian McKeown of the Castle Shannon Police Department was one of 213 law enforcement officers who graduated on June 10, 2016 from the FBI National Academy Program at Quantico, Virginia. The 264th Session of the NA consisted of men and women from 47 states. Included were members of law enforcement agencies from the District of Columbia, 21 international countries, four military organizations and eight federal civilian organizations.

The FBI National Academy is a professional course of study for U.S. and international law enforcement leaders that serves to improve the administration of justice in police departments and agencies at home and abroad, and to raise law enforcement standards, knowledge, and cooperation worldwide.

Internationally known for its academic excellence, the National Academy Program, held at the FBI Academy, offers 10 weeks of training for selected officers having proven records as professionals within their agencies.

Its mission is "…to support, promote, and enhance the personal and professional development of law enforcement leaders by preparing them for complex, dynamic, and contemporary challenges through innovative techniques, facilitating excellence in education and research, and forging partnerships throughout the world."

Sergeant McKeown took courses in Leadership, Ethics and Decision Making, Drugs, Society, and Contemporary Enforcement Strategies, Critical Incident Leadership (Negotiations Principles), Contemporary Issues in Police and Media Relations, Overview of Forensic Science for Managers and Administrators, and Law Enforcement Fitness. He also completed the Marine Fitness Course titled “The Yellow Brick Road” and earned a coveted yellow brick, as a badge of his perseverance and commitment to the program.

Sergeant McKeown joins the ranks of less than 1% of law enforcement executives who are invited to attend the program. 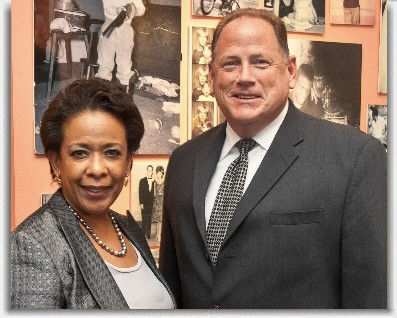 The AG was in Pittsburgh to address the F.O.P. convention in August 2015. She met with Local, County and Federal Law Enforcemnt Agency Leaders at the behest of the US Attorney for W Pa. David Hickton. 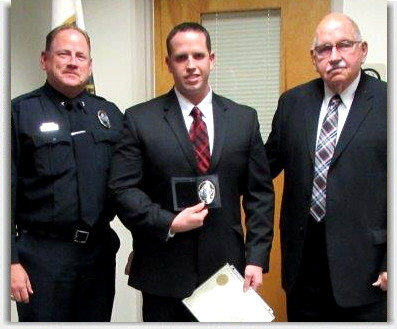 Dan is a graduate of Point Park University and previously worked for Carnegie Mellon University Police. He was sworn in at the Borough Council meeting of November 9, 2015.

CSPD wins the AAA Platinum award for Community Traffic Safety efforts for the 7th straight year. Chief Truver and Mayor Baumgarten accepted the award at a ceremony in Cranberry November 4, 2015. Congratulations to the officers for their continued diligence in traffic enforcement and education. 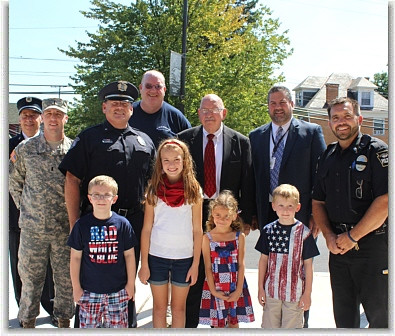 Students from Myrtle Elementary School paid tribute to Emergency Responders as part of their 9/11 remembrance ceremony. 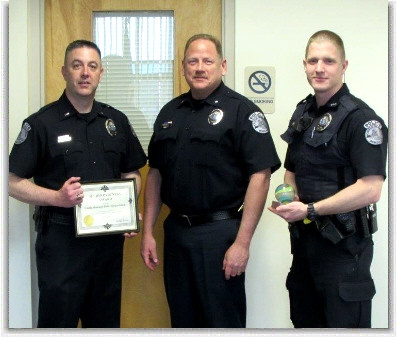 The Castle Shannon Police Department was recently recognized by the Center for Victims at their Peace it Together ceremony on March 12, 2015. CSPD was one of the first Police Departments in the region to adopt the Lethality Assessment Program. The protocol involves a survey for victims of domestic violence to assess the potential for violence before, during and after police involvement of an incident. If the proper triggers are noted, the victim is immediately referred to a victim advocate for follow up and assistance. Borough Council recognized the agency and Mayor Baumgarten presented a certificate at the Council meeting of       4-13-14. 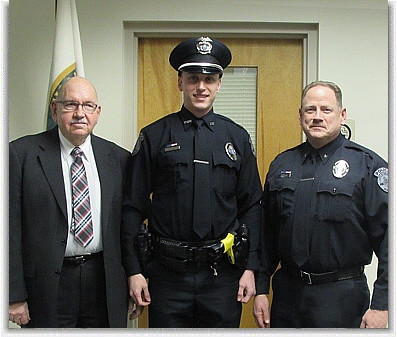 Michael Kalas (pronounced Kay-Less) was hired on January 12, 2015. Officer Kalas started on January 19th and was sworn in by Mayor Baumgarten at the Borough Council meeting of February 9, 2015. Mike is a graduate of the California University of Pa, and worked previously for Delmont, Trafford, Turtle Creek, Irwin, and the University of Pittsburgh Police Departments. 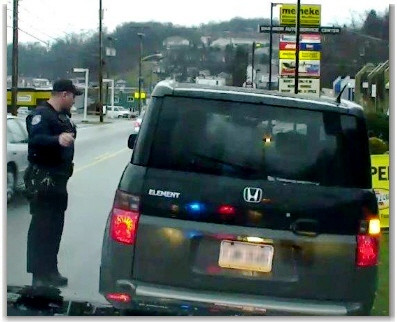 The Castle Shannon Police Department was among 40 western Pennsylvania police agencies that earned AAA Platinum Awards for their community traffic safety efforts, according to officials at AAA East Central. This is the sixth consecutive year the Castle Shannon police department has received the recognition. Mayor Baumgarten and Chief Truver accepted the award plaque at a ceremony in Cranberry in November. The awards were given to “commendable leaders” for their safety efforts and enforcement activities geared towards making communities safer. The departments were among hundreds nationwide that participated in the Community Traffic Safety Program and among 91 regional entrants recognized by AAA. “We are very proud of the departments for their achievement and participation in the Community Traffic Safety Program,” said J.J. Miller, AAA safety adviser. “They went above and beyond the call of duty by organizing projects which would make their community a safer place for motorists as well as local residents.” To be eligible for the annual awards, a community must conduct traffic safety promotions and educate the public on safety topics. Castle Shannon Police Chief Ken Truver said the recognition results from a proactive approach to traffic safety by the police department and the department’s participation with the Pennsylvania Department of Transportation to monitor traffic issues and conditions. Efforts to improve safety for drivers and pedestrians in Castle Shannon are based on three E’s — education, enforcement and engineering — with PennDOT, the Borough and our contracted engineers supplying the third component, Truver said. 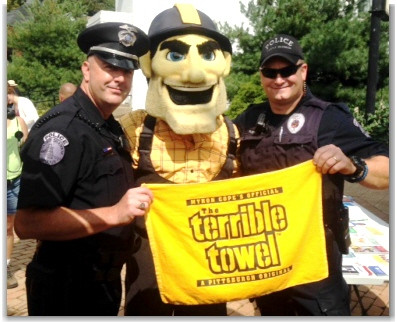 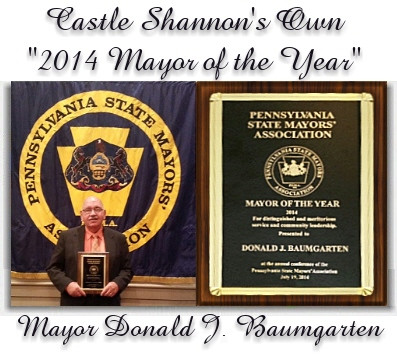 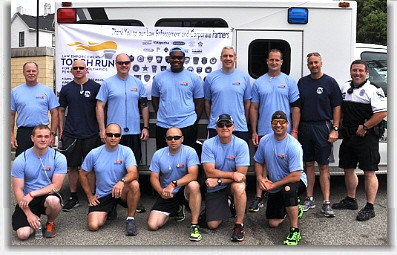 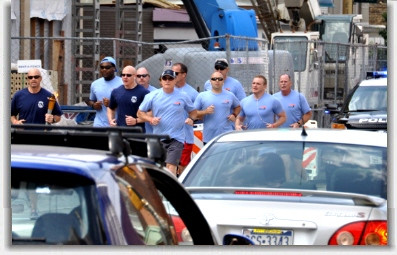 Sergeants McKeown and Watkins ran the Law Enforcement Torch Run on 6-3-14 to raise awareness and funds for the PA Special Olympics. 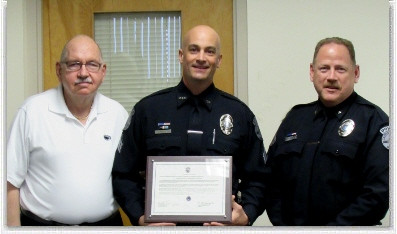 Sergeant Gary Watkins was recognized at the April 14th Borough Council meeting for his successful completion of the 256th session of the FBI National Academy in Quantico Virginia. 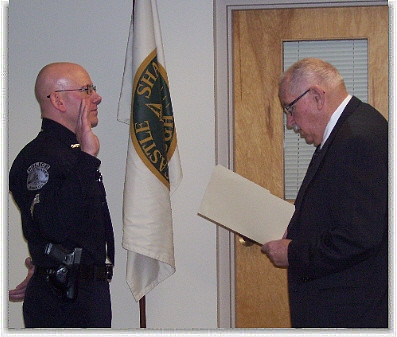 Sgt McKeown has served as a Field Training Officer and is the Department Investigator and evidence custodian. He is also certified as an MPOETC Municipal Police Instructor.

Chief Ken Truver said, "This officer is a stand out performer and has proven himself worthy of promotion time and again." 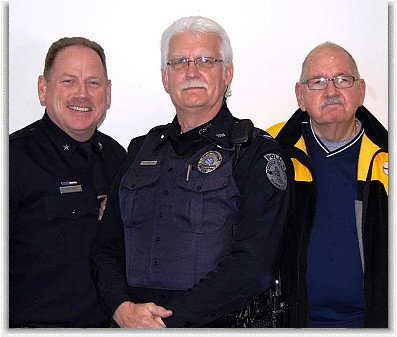 While his retirement isn’t effective until 2-1-14, Mike will be using his final accumulated vacation time in the month of January.

Lt Cheberenchick served the Borough as a police officer for over 35 years. Please wish him well in his retirement. 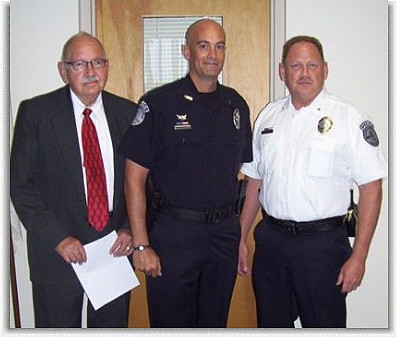 Gary Watkins was promoted to the rank of Sergeant with the Castle Shannon Police Department at the Borough Council meeting of July 8, 2013. 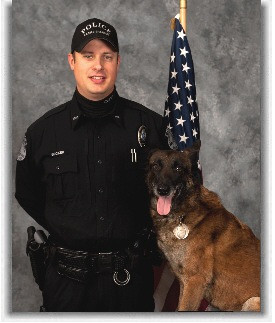 Nitro, a Belgian Malinois was born in Holland on February 20, 2003. He was trained in Colorado and Ohio, before starting his Pennsylvania Law Enforcement career in Verona, Pa.

On October 2005 Nitro was paired with Castle Shannon Police Officer Jeff Recker and they were certified as a K9 Team.

In addition to conducting scores of K9 demonstrations and community service details, Nitro was responsible for numerous criminal apprehensions and the seizure of an abundance of drugs, paraphernalia and illegal cash.

The K9 Team of Recker and Nitro also were credited with finding missing children, endangered persons, and conducting article searches and assisting with crowd control at community events and disturbances in Castle Shannon and neighboring communities.

The pair will be honored at a brief ceremony during the June 10, 2013 Borough Council Meeting. 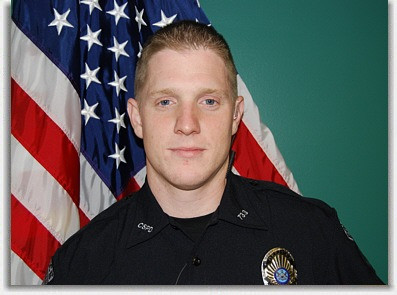 Officer Majors was sworn in at District Judge Barton’s Office on April 29, 2013, and a ceremonial swearing in by Mayor Baumgarten will take place at the May 13, 2013 Council meeting.

Justin is a graduate of Hopewell High School and obtained a Bachelor of Science Degree in Criminal Justice from Slippery Rock University.

He graduated from The Beaver County Community College Police Academy and previously worked as a Police Officer in McDonald Borough and Ohioville Borough. 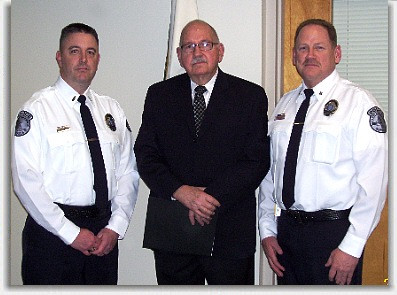 David Lane was promoted to the rank of lieutenant with the Castle Shannon Police Department at the Borough Council meeting of March 11, 2013.

Lieutenant Lane was hired in 1992 as a part time police officer. He was hired full time in 1993 and promoted to the rank of Sergeant in 2001.

He has an undergraduate degree from Community College and is a graduate of the 245th session of the FBI National Academy.